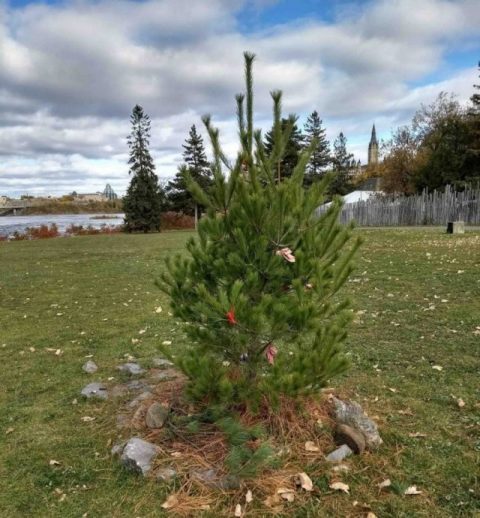 The peace tree is an idea that recurs across the world (see The Peace Tree by Mitra Sen). Ideas of unity and the peaceful association of groups are often linked to these traditions. In this article we will explore the peace tree in north-eastern North America, the well-known stories about it, and the less known history of it at Akikpautik/Chaudiere Falls in Ottawa-Gatineau. We will also review the meanings of the falls and islands and their relation to the political concepts swirling around the area.

On the north-eastern side of Turtle Island, the Peace Tree is generally associated with the Haudenosaunee and related to the White Pine. In the generally recounted history of the Peace Tree, the Peacemaker symbolically uprooted a white pine tree. There is another little known history that near Akikodjiwan just west of the current Museum of History there was a peace tree, and that it was here that the Peacemaker introduced Hiawatha to the peace tree there. A burial ground has been found near this place – which lends credence to the idea. The people were asked to throw their weapons of war into the pit where the tree had been.  At the bottom of the pit was an underground river that carried the weapons away so that future generations would not see them. It is interesting to note that the Devil’s Hole in Gatineau leads to an underwater cave which travels underground 2 km near to the reputed location of the Peace Tree. 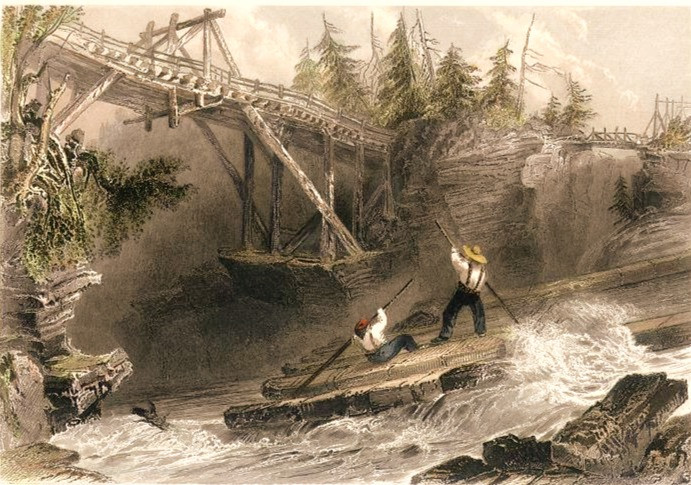 So it may be that this is an echo of an historical event. In the Gatineau version of that history, First Nations would bury their weapons prior to negotiation.

In the larger area, the first confederation was the Three Fires Confederacy/Niswi-mishkodewinan, founded in 796 AD among the Anishinaabe Ojibwe, Ottawa, and Potawatomi – with Michilimackinac as its primary meeting place. This confederacy later included the Hurons, Algonquins, Nipissing, Sauks, Foxes, and others, who joined the Confederacy in the 1700s. This powerful body provided the British with important allies in times of war and was a balance to the Iroquois Confederacy that later developed to the south and east. It is possible that the establishment of this confederacy led to the creation of the 5 Nations.

The influence of the Haudenosaunee in the Ottawa River valley was strengthened by French and then British support starting from the 1600s but it remained an Algonquin Anishinaabe watershed, if lightly held.

The prophet, the Peacemaker/Deganawida/Two River Currents Flowing Together may have been an Onondaga, or Huron, or later adopted as a Mohawk. Deganawida and Hiawatha may have met in Onondaga territory, with Jigonhsasee – the Mother of Nations. She played a major role in the development of Haudenosaunee ideology. Cohoes Falls in upper New York State was where the Peacemaker met the Mohawks and convinced them to join him.

Around the time of the eclipses of 1142 or 1451, the Peacemaker and Hiawatha likely met to found the Haudenosaunee Confederacy – consisting of a council of clan and village chiefs to govern the confederacy.

The symbol chosen for the League of the Five Nations was the great white pine tree, “the tree of the Great Long Leaves”[4] The tree had four symbolic roots, the Great White Roots of Peace, spreading north, east, south, and west. If any other nation ever wished to join the League, it would have to follow the White Roots of Peace to the source and take shelter beneath the tree. Atop the tree, he placed an eagle to scream out a warning at the approach of danger. He symbolically planted the tree in the land of the Onondagas, the place of the Grre, the confederate lords, or peace chiefs, to sit beneath it and be caretakers of the Great Peace.[4]

And as much as the white pine as the Peace Tree has been associated with the Haudenosaunee, the white pine has been accepted as the state tree of Michigan and Maine. More importantly, the white pine as the Peace Tree was accepted by the Algonquin Anishinaabe, the Huron, the Haudenosaunee and many others like, the Odawa, Miami, Nipissing and Petun in the Great Peace of Montreal in 1701. As a general symbol of peace, the Ojibway and the American government establshed the White Pine Treaty of 1837 for lands in Minnesota and Wisconsin.

While Mohawk influence was certainly apparent at Chaudiere Falls – the local name Mohawk word is Kanats’o, referring to the boiling kettle, which was likely transliterated into French and English as Chaudiere and the Kettle in English. It is a naturalistic concept like the various Anishinaabe versions of the place names. However, the Onondaga, who are little known along the Ottawa, have their own name for Akikodjiwan, Katsidagweh niyoh/Chief Council Fire, which is the only place name in the area with a singularly political meaning.

Since the area would not be one with heavy influence of the Onondaga, and that the Mohawk name is naturalistic, this understanding of the place would be for the meeting of different indigenous groupings – most obviously the Anishinaabe and Haudenosaunee.

The Algonquin have several relatively naturalistic names for the falls. They also call the place Pipe Bowl Falls/Akikpautik. The Pau of this refers to the blowing aspect of the smoke, and this can be associated with the spiritual, communal and peaceful sharing of tobacco with pipes, though perhaps not as directly as the Onondaga name for the place. Pipes are of course associated with councils and peace – smoking the peace pipe is a classic metaphor. There are many places with the blowing pipe concept in the place name of Algonkian-speaking areas.

The archeology suggests that peoples were coming from much further away for thousands of years – though one could suggest this was really more about the trade of vital goods or exchange of ceremonial objects. Now why only these specific areas would keep bringing these artifacts and not from other areas makes less sense. For example, archeologists keep finding artifacts from specific identifiable locations – copper from northern Lake Superior, stone from James Bay, Mistassini, the Inuit northern tip of Labrador, Ohio and Indiana – the four directions. But why don’t we see say wampum shells or minis/cowry shells from New England with regularity – particularly as they were important in treaties and indeed the migration history of the Anishinaabe? Travel down to the Gulf of Mexico is known, nevertheless. Closer to home, the relative lack of objects from the Atlantic Coast is striking. Considering the low relative influence of the Onondaga in the area, it encourages the belief that Akikodjiwan was a chief council of a variety of nations, a kind of meeting of nations, not unlike the United Nations in New York.

Akikodjiwan is a place that was clearly an interface between the Algonkian-speaking peoples and Iroquioian speaking peoples. However, some of the cherts/flints that regularly come to Ottawa/Gatineau are in Paleo-Eskimo/Inuit territories at the northern tip of Labrador. This suggests that the cultural interface might have been wider than generally thought. So perhaps Akikpautik may well have been the ancient equivalent of the United Nations at New York – the larger trading/negotiating area for at least 7,000 years – beyond a single language or culture, which maps well to William Commanda’s concept, the Circle of All Nations.

So what have we learned? Perhaps that elements of the peace tree in north-eastern North America may have historically singularly happened or been repeated at this place e.g. because of the connection of the burying of weapons and underground river channels. That development of the place with both spiritual and negotiation aspects is engrained in both Anishinaabe and Haudenosaunee names for the place. Finally, that Akikodjiwan/Chaudiere has undoubtedly been a cultural interface for thousands of years, and this is true today for the settlers too, in this case between anglophone and francophone Canada.

Learn more about the legacy of the Peace Tree on Victoria Island, as told by Grandmother Christine Vincent.