If Windmill’s condo plan proceeds, it will be “monument to broken promises”

A monument to broken promises. That’s how Algonquin two elders are describing the consequences of a condo and commercial development that Windmill Development Group is proposing for the sacred site Asinabka/Akikodjiwan.

He and other Algonquin Anishinaabeg Elders will be leading a walk to uphold the sacredness of the site and to “urge the federal government to halt all development immediately and declare it sacred and protected.”

Another respected person, Elder Jane Chartrand, says that “officials in the national capital region are barging ahead on this project as if they had no idea that they are sitting on unceded Algonquin land. In effect, everyone in Ottawa – including Members of Parliament – are tenants who have not paid their rent! This is sacred land which deserves our respect.”

The sacred walk begins at 10 a.m. on Victoria Island with ceremony, and will end on Parliament Hill in the early afternoon of Friday, June 17.

In other news related to the sacred site, five appellants who originally launched legal challenges against the City of Ottawa’s October 2014 rezoning of Chaudière and Albert Islands, which are part of the sacred site, have filed papers in Ontario Superior Court (PDF will load) seeking leave to appeal a May 26 decision by Judge Hackland. The five appellants have been fighting the City of Ottawa and Windmill Development Group at the Ontario Municipal Board over the rezoning of the sacred site for 18 months.

Among the appellants, renowned architect Douglas Cardinal, is determined to oppose the rezoning of the islands and is seeking “to be heard” in court. He has alleged in public meetings that his right as an Anishinaabe to raise constitutional matters in regard to this municipal rezoning is being ignored. The grounds for the June 9 motion for leave to appeal include: 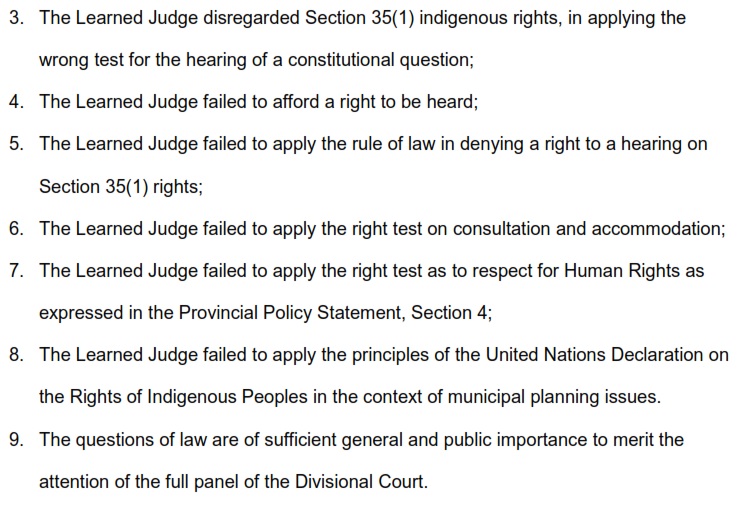 Meanwhile, Senator Murray Sinclair told an audience at the City of Ottawa’s Aboriginal Awareness Day on June 14 that one of the things the city can do, in support of an official recommendation from the Truth and Reconciliation Commission (TRC) that he chaired, is to use the United Nations Declaration on the Rights of Indigenous Peoples (UNDRIP) in the municipality’s dealings with Indigenous people. In fact, City of Ottawa solicitors have told judges in the appeal cases related to rezoning of Chaudière and Albert Islands on the sacred site, that UNDRIP is “an aspirational document.”

In general, this is much less the case since Justin Trudeau’s federal government announced less than a month ago, on May 16, 2016, that it will endorse UNDRIP.