Documents circulated Dec 6, 2016 by the City of Ottawa’s planning department point to Windmill Development Group’s leasing of lands on Chaudière and Albert Islands, while a Dec 7. statement of claim by Kitigan Zibi Anishinabeg First Nation, on behalf of the larger Algonquin Anishinabe Nation, names Chaudière and Albert Islands as part of a legal challenge at the federal and provincial levels.

These documents have a bearing on each other because:

The city of Ottawa must stop operating as though islands it claims to have rezoned for a condo development can, in fact, be treated like other parcels of land in the city;

Evidence shows that the developer is leasing and is therefore a tenant on lands the city is approving for the Zibi condo development; and

The Kitigan Zibi statement of claim names the province of Ontario (from which all municipalities in the province gain their powers) as a defendant. Specifically, the statement outlines that: 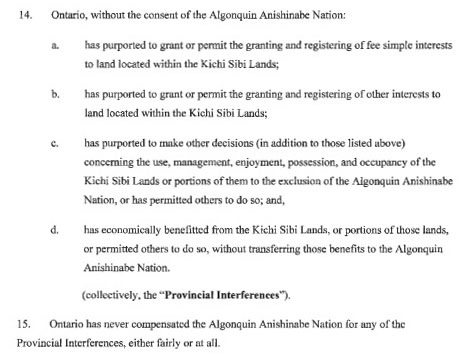 While this statement of claim involving the province of Ontario makes its way through the courts, all decisions regarding parcels of land on Chaudière and Albert islands must be considered to be “on hold.”

Documents created by the City’s planning department were circulated on Dec. 5, 2016 to a group of about 40 citizens in the city. They constitute the city’s draft approval of Windmill’s site plan application for 3 and 4 Booth Street. Document 1-Location Map produced by the planning department purports to describe where 3 and 4 Booth Street are located. 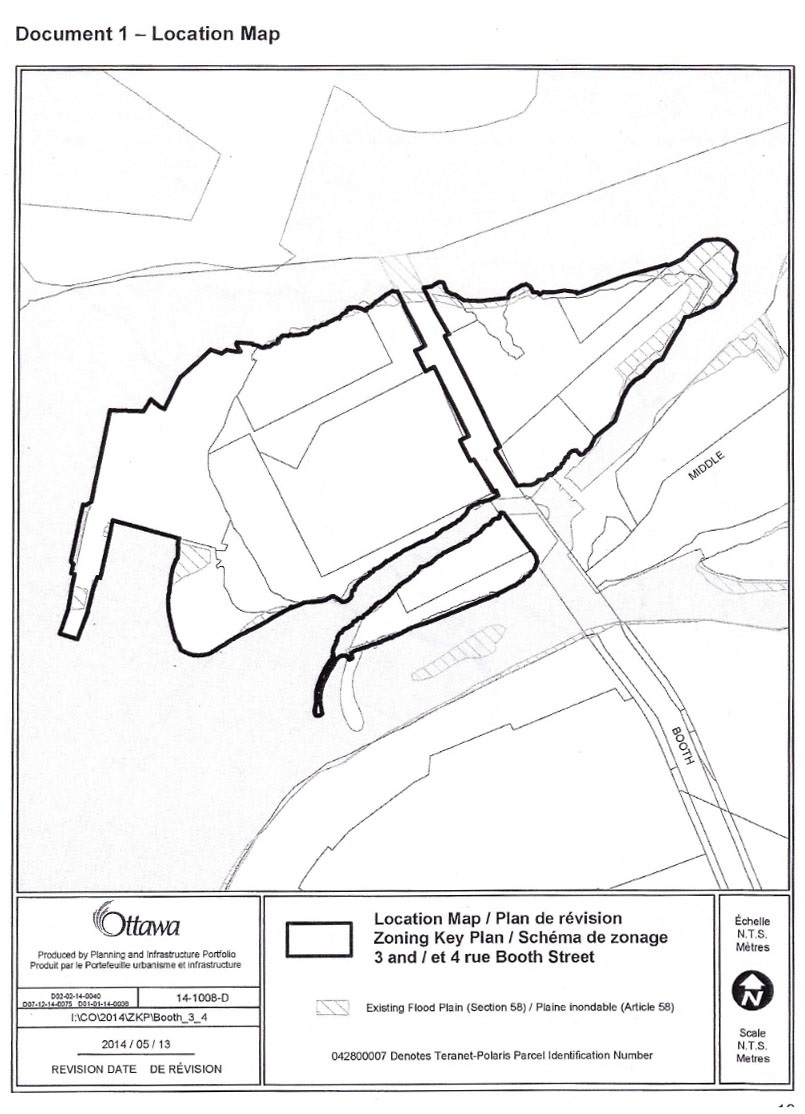 Due to the lack of solid information on this map, and based on his extensive research into land issues on Chaudière and Albert Islands, local historian and researcher, Lindsay Lambert, wrote to the planning department seeking answers.

On December 8, he asked Allison Hamlin (cited as the city’s contact on the original documents) to clarify what city-owned lands are covered in the site plan application. He began by stating that “3 & 4 Booth represent only a portion of Chaudière Island.”

Lambert’s letter went on to say:

“The Region 03 Assessment Roll, compiled in 2015 for 2016 taxation, provides a comprehensive description of the addresses and other properties on the two Islands.

3 Booth Street is on the east side and is comprised of Building Lots 7, 8 and part of Lot 9, with parts of Head Street, Union Square and Chaudière Street.

Lambert’s research includes a map he obtained from Service Ontario (see below, with handwritten markings). It shows a very different configuration for 3 and 4 Booth Street than the map the planning department is circulating. This is backed up by the Region 3 Assessment Roll, which sets out location and ownership of these parcels of land. 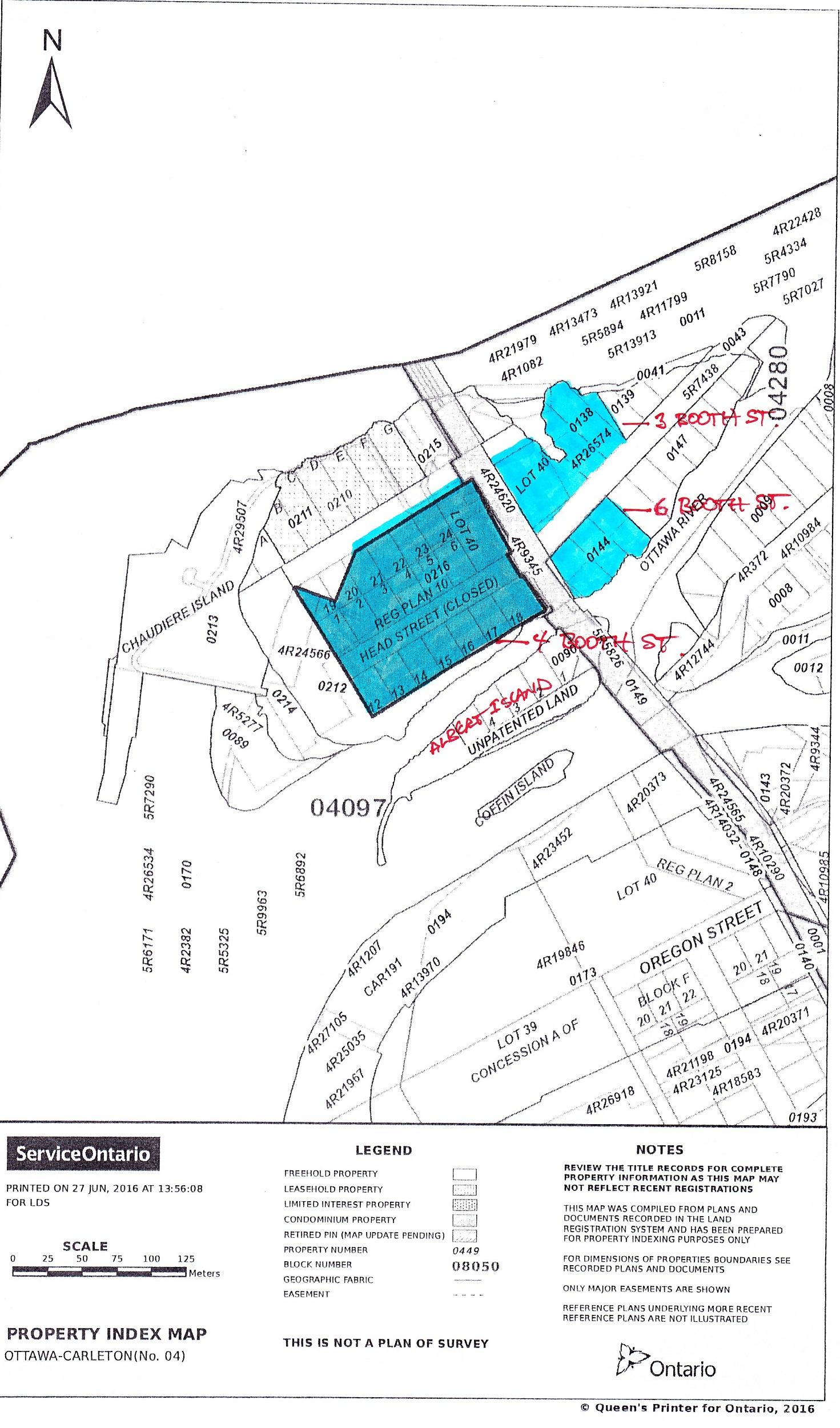 Lambert’s letter of Dec. 8 asked the City’s planner to explain which parcels of land are covered by the site plan’s draft approval. He also challenged the statement on page 5 of the city’s draft approval that says, “The proposed development is on the privately-held former Domtar lands.”

“This isn’t true. According to the current Ontario Land Registry Office records, the only things registered to Windmill are a five year lease and a sublease, both from Domtar. Windmill owns nothing.”

In her Dec 12 reply to Lambert, Allison Hamlin said:

“It is my understanding that there are still discussions underway to acquire title either through traditional ownership or long-term lease to these lands. I am not party to these discussions.”

She suggested that Lambert contact Windmill Development Group directly for answers on this.

Lambert’s research into the questions of colonial “ownership” of lands on the islands includes the following, which he shared with Ms. Hamlin in his letter.

“On page 5, you list the comment that “condominiums should not be built on sacred Anishinaabe Territory.” Your Staff respond that “the proposed development is on the privately-held former Domtar lands.” This is a questionable assumption. According to National Archives records, there is no private ownership on the Islands. They are Crown Land:

On August 25th, 1854, the Government of the Province of Canada approved an Order in Council reserving Chaudière, Albert and other Islands for Public Purposes, along with an area of the Ottawa shoreline. It states that they may be disposed of when not required for Provincial Works, and leasing is specifically recommended. The Islands were surveyed into Hydraulic and Building Lots, which were made available from 1857 to businessmen who would immediately put them to industrial use. They were not offered for speculation. (Harnessing the water power was considered to be for the greater public good.) The Hydraulic Lots were the most important, and were leased by the Crown for the construction of mills. These leases were “forever,” renewable on a 21 year basis, and remain in force as long as the lessee adheres to the conditions: They must pay their rent, maintain their infrastructure so as not to interfere with their neighbours, and operate a mill. (Domtar closed theirs in 2007.) Furthermore, the Crown can “take them back at any time for any public purpose.” The Building Lots are listed separately, with minimal description. They were offered for $10.00 each, on the condition that an industrial building to a certain value is constructed within a year. If not, the Lot reverts to the Crown and the person loses their deposit. There is nothing to indicate that they were being sold outright.

Sir John A. Macdonald wrote a letter on July 15th, 1869. He states that the first industrial occupiers, Messrs. Perley and Pattie, have a “Licence of Occupation,” that the area is Crown Land, “and was before the first of July, 1867.” There was a legal question in 1902 as to whether the Islands were under the jurisdiction of the Federal Government or the Province of Ontario. The conclusion is that “the Chaudière Islands, slides and Hydraulic Works connected therewith, except such parts as had been granted by the late Province of Canada; and also the entire water Power of the Ottawa River flowing past the Islands, are the property of the Dominion of Canada.” According to Sir John A., there were no pre-Confederation grants.

The Federal Government took back an area at the eastern end of Victoria Island in 1926, for the Royal Canadian Air Force aircraft repair depot. They followed the Hydraulic Lot rules, giving the occupant 30 days notice to clear their lumberyard and vacate, with nothing owed by the Crown. The interesting part is that there are no Hydraulic Lots there, just Building Lots.

The Hydraulic Lots on the Chaudière Islands remain Crown Land. Domtar claims that they own the area of the Building Lots. This issue is easy enough to resolve. All they need to do is produce their original land deeds, showing that they own them all in fee simple. If they can’t, it’s still Crown Land. Will the City of Ottawa please look into this? We all need to know.

As a small note, your staff describe the proposed Zibi site as “former Domtar lands.” This isn’t true. According to the current Ontario Land Registry Office records, the only things registered to Windmill are a five year lease and a sublease, both from Domtar. Windmill owns nothing.

Citing private ownership in reply people’s concern that condominiums shouldn’t be built on sacred Anishinaabe Territory is evading the issue. Everyone acknowledges that the Chaudière Falls and Islands are sacred, including the developer who is using it as a selling point. The question is, should such an important place be open for private development? Last month, the Ottawa Police arrested a young man for vandalizing a Mosque, Synagogues and a Church with swastikas and other hateful graffiti. The incidents were discussed in the House of Commons, and Ontario Premier Kathleen Wynne visited one of the affected Synagogues. In her speech, she said “by doing these things, by defacing people’s property and religious sacred sites really to instil fear in communities, it’s reprehensible.” Graffiti can be removed with some solvent and elbow-grease. Indigenous people here have fared much worse: Ottawa is situated on unceded Algonquin territory. This is a legal fact, determined by the Supreme Court. There was no treaty agreement here. People were systematically pushed aside. Asinabka/Akikodjiwan, their sacred and peaceful meeting place that has been used for at least 5,000 years, was despoiled by industry. Akikpautik, the Chaudiere Falls, was ultimately effaced in 1908 by the construction of the Ring Dam across the entire span. Now that the industrial use is past, we have the opportunity to free the Falls, restore the Islands as parkland, and give them back in the spirit of truth and reconciliation. We will benefit from this as well. Is the City asserting that an Indian sacred site means nothing, other than being a pleasant fable to cite when convenient? This colonial racism has no place in 21st century Canada.”